Birman cats have something from the subtle charms of Paris and intelligent wisdom in the Eastern world. In fact, he is a saint - the Sacred Birman cat whose biography of the breed has a fascinating legend. So beautiful that it seems that these cats are deserved only by particular people.

The legend states that many years ago before the birth of Buddha the Kymer people of Burma who were very devout, built wonderful temples to their Goddess Tsun-Kyan-Kse. The priests of the temple also kept one hundred pure white cats as companions and temple guardians. The most beautiful of these temples at

Lao-Tsan contained a solid gold statue of the Goddess, with sapphire eyes. The elderly head priest Mun-Ha had an especially devoted friend in his cat Sinh. One stormy night, raiders attacked the temple, killing the priest Mun-Ha. Immediately the cat Sinh leapt to assist his master, and as he stood on Mun-Has dying body before the golden Goddess the priests soul entered into Sinh and his appearance was changed to one of great beauty, that of a seal-point Birman complete with golden tipped coat and sapphire eyes. Goddess the other priests drove out the raiders and saved the temple. Sinh lived for seven more days without either food or water, before dying and taking his and Mun-Has souls into Paradise. Next day the remaining ninety nine temple cats were found to be transformed like Sinh, and from then onwards they were regarded as Sacred Cats, and thought to contain the souls of pious priests on there way to heaven.

Many people dismiss this legend as just another pretty story to explain the existence of another manufactured cat, but evidence from Birman Cat Club members suggests that cats similar to the Birman have been known in that area of the world for very many years. During the 1930s, Mr Len Sayer, whose wife Joan bred Birmans under the Sayella prefix for many years, was serving with the British army in Burma. Always a cat lover he remembers seeing groups of seal-point Birmans living wild amongst temple ruins. These cats were fed and protected by the local people who believed that to injure a Sacred Cat was to put their immortal souls in danger. Similarly, there are younger and older testimonies of similar “national cats” seen, as well as their photographs and drawings in Burma (present-day Myanmar), a place that is closed and stand alone, seemingly still lingers in the past.

But how did the Birmans find themselves in Europe? How did they get recognised as a breed?

Most likely the Birmans’ came to Europe in 1919 with two Englishmen – Major Gordon Russell and August Pavie who lived in France. They received a couple of Birmans from Kittaha, as a thank you for investment for saving the temple. Another testament shows that the millionaire Vandenrbuilt imported Biramns in Europe. Some sources say that these cats were bought from of monk who stole them.

But in any case, first known Birman cat in Europe was a male Madalpure and a female Sita. Unfortunately, the male Madalpure died during the journey, but the female survived the long journey over the ocean. Sita was pregnant and gave birth to a litter of kittens. The first evidence has been preserved for the Sita Kitten Birman cat Poupee de Madalpour (Doll), which belonged to Mrs Leotardi in Nice, France. 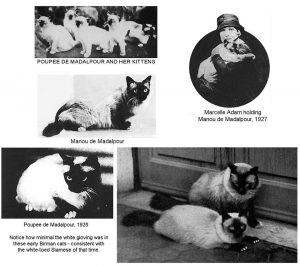 The development of the Birman cat breed was successfully done in France. In 1925 French Feline Federation recognized the breed of Sacred Birman and its standard was approved. In 14th-15th of May, 1926, the French exhibition focused on Sita’s daughter Poupee de Madalpour and her two sons. But the Second World War stopped the Birman triumph in France and most Birmans were destroyed. After the war, the reestablishment began with the surviving copies. Despite the difficulties, the “rebirth” of the breed took place in France, Switzerland and Belgium. The complete reestablishment of the breed was completed only in 1950.
The “recipe” used for the reestablishment is still mysterious, but it is known that Persian and Siamese cats have also been used. Birman cats quickly began to spread elsewhere in Europe, and in 1956 Birmans came to America, in 1964 to England, in 1967 to Australia, about 1970 to South America.

While elsewhere in Europe and in the world, there was a rapid development of the Birman cats, these cats were not represented in the Soviet Union. Only in 1993, the first Birman (from Switzerland) was introduced into Russia. In its turn, in 1996, cat Danda (owner S.Yaremenko) was imported from Italy to Russia. Catania Danda is also represented in the pedigree of our cattery Merveille Neige de Saphir * RU (second cat in cattery).
Meanwhile in the Baltic States, Estonia is considered to be the pioneer of the Sacred Birman cats. Right from Estonia in 2001 to Latvia was imported the first known Birman cat – Cinamon Lowe Klaudia * EST (owner L.Remberga). In 2002, our first cattery cat Dyja Klaudia * EST and her sister Diti followed. To this day, only from the Dyja Klaudia * EST line the Birmans are being reproduced in Latvia.